Before the patenting of the first steam driven bruting machine in 1874, diamond cutters took the rough diamond which was an octahedron — the most common shape for gem diamonds which consists of two four-sided pyramids attached base-to-base, and manually round off the corners to create a cushion shape stone. They then faceted the diamond from what was left to what is known today as an old mine cut.

After the invention of the bruting machine, diamond cutters were able to make round stones instead of just cushion shapes leading to what is known today as an old European cut diamond. These stones had the same characteristics as the old mine cut diamonds: small tables, steeper crown angles, short star facets, large cutlets and short lower girdle facets that made the pavilion main facets to be wide. The old European cut diamond had a total of 58 facets same as today’s modern round brilliant cut.

Here’s diagram from Gemological Institute of America on the terminology of a diamond’s facets and cut scale: 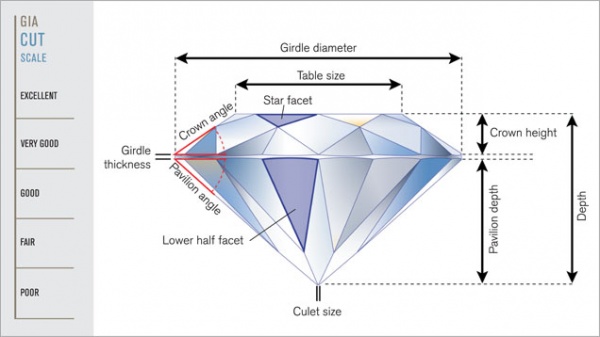 Here’s a picture I took of an old mine cut diamond next to an old European cut diamond that has some characteristics of a transition cut diamond as well:

The old mine cut diamond on the left is hand cut into a cushion shape, it has a small table, steep crown angle and short star facets and a large culet.

The diamond on the right has characteristics of an old European cut since it has steep crown angle, short star facets, open culet ( you can see a small circle in the middle of the diamond which is the culet but the old mine cut has a large circle in the middle ). It also has longer lower girdle facets and slightly larger table which is characteristics of a transition cut.

The diamonds cut during 1920s through 1940s are often referred as “transitional cut” rounds. This is when incandescent lighting became more popular for use in businesses and finally after the end of Second World War electricity and electric appliances became common in all households. This changed how people saw light reflecting from diamonds. Diamond cutters started lengthening the lower girdle facets which gave stones more “life” under electric light. The term “transitional cut” means they were crafted in an era when the industry was moving from the old mine and old European cuts to the modern round brilliant.

If you have grandmother’s engagement ring:

When my customers come in with their grandmother’s engagement ring and they ask me to take out the center stone to make a an engagement ring for them, the center diamond is usually either a “transitional cut” round or an old European cut. Sometimes it has chip in the girdle. This is common as it’s normal wear and tear on the diamond throughout the decades.

If the diamond has a chip:

If you don’t have a grandmother ring and you’re looking to purchase an old European cut diamond, I suggest to look at ones that have a GIA certificate. The ones that I bring in for my customers to look at and choose from have a GIA certificate. These are older stones that have been re-polished and certified. I also suggest to look at stones with GIA certificate not an EGL certificate. Old mine cuts, old European cuts and “transitional” cuts look magical in candle light. The way they reflect light is big and bold. Another common characteristic is that most older stones ( not all ) have some color to them, but they are pretty clean as far as inclusions. As I always advice my customers, when comparing loose diamonds, look at them in natural light not electric light. That’s how you truly see their color, their life and their characteristics.

Making a ring is truly magical. It goes through many... END_OF_DOCUMENT_TOKEN_TO_BE_REPLACED