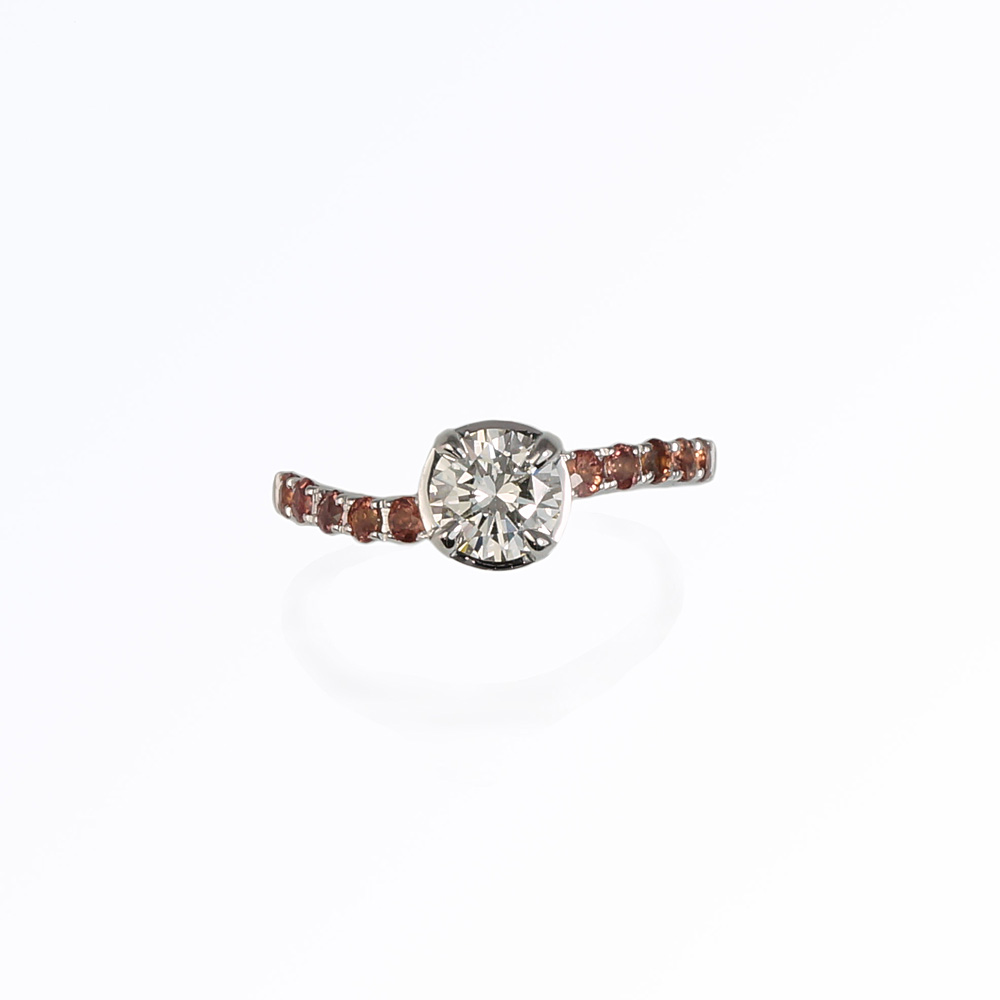 That’s what Joel had in mind when he first called me! He wanted a surprise engagement ring – nothing traditional nor mainstream. He knew that his girlfriend’s favorite colors are orange and purple. He liked the idea of a curve ring such as the Jackie and the Lydia engagement rings which he saw on my website and he wanted a Lotus flower! The rest, he left it up to me to put it all together and make his girlfriend the perfect engagement ring.

First thing that we needed was to pick out the center gem, which in Joel’s case was a diamond. The structure of a ring always depends on the center gem. The color, size and shape of the center stone determines the scale of the entire ring. The sides should be proportional to the center, always enhancing the center gem and never compete with it.

I brought in a few diamonds for Joel to pick from. The one that he chose is a 0.64 carat diamond GIA certified. Next, I started combing through colored gems to see what would be the most suitable for Madeligne’s ring.

Ninety five percent of my clients, come in for a custom made surprise engagement ring and I always ask to see images of their girlfriend. That’s how I can design a different engagement ring for each person. I make the ring according to the person’s style and personality that I see in the image. A picture of the hand makes it even more perfect, as the structure of the hand will give a good idea about the general shape and height of the ring.

From the pictures that Joel showed me, Madeligne looked like a very happy, bright and absolutely lovely young lady! For the orange and purple colored gems, representing Madeligne’s favorite colors, I decided to use natural orange and purple sapphires! They were the most appropriate choice for their brightness and durability. I picked out 2.2 millimeter orange sapphires to go on top of the band, on the curve, and tiny purple sapphires for the lotus flower that would make the walls of the center basket. As for the design of the lotus flower, I decided to put them in an angle to complement the wave shape of the the band. I also made the center diamond stand out by making a bright polished rim around the diamond! 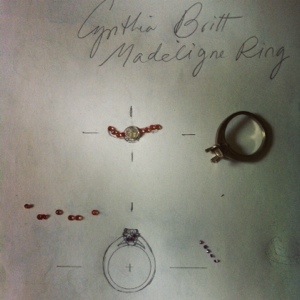 Here’s an image if my design with the chosen gems on top of the design! 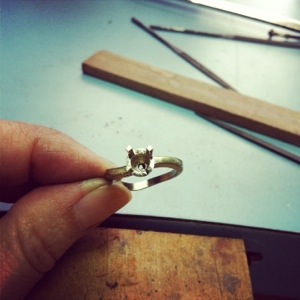 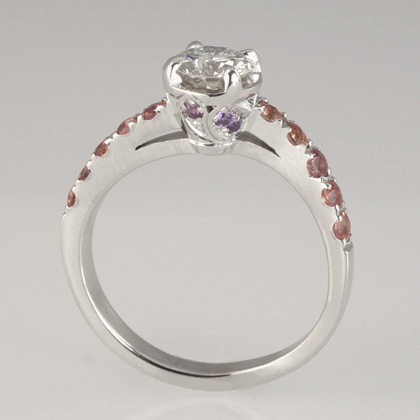 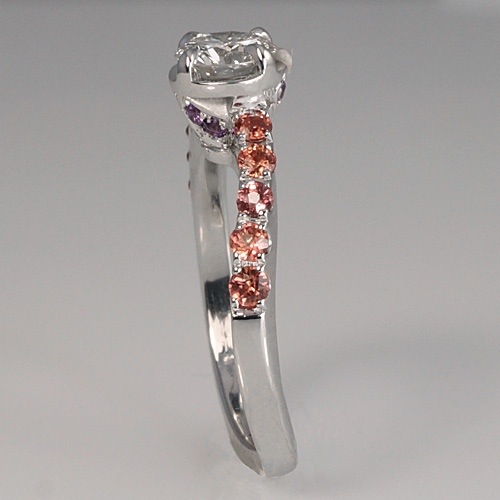 This one shows the orange sapphires on the curved band

Joel surprised Madeligne in a most wonderful way! After their engagement, Madeligne came in to talk about wedding bands and that’s when I took this picture of Madeligne’s beautiful hand wearing her custom made surprise engagement ring!! 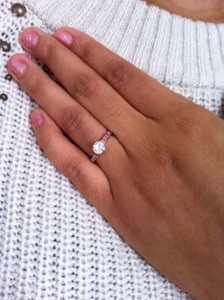 Congratulations to an adorable and delightful couple!

Cynthia literally took all the anxiety out of buying my engagement ring. Cynthia is beyond a jeweler she is an artist. She literally takes everything into consideration and designs the best product possible.

I literally said to her:
1.I want something that looks like a flower.
2.My girlfriend likes everything but is picky also.
From that she designed something that was more beautiful then I could have imagined.
She is not overcharging you, making money of materials,or trying to up sell you either, but she was actively trying to save me money.
I learned something about precious metals or stones every time I met with her.

Ultimately, if you want something unique,elegant, not overpriced, and an actual piece of art then see Cynthia.

P.S She is so incredibly friendly.

P.S.S Did I mention she was trying to save me money!!!!!!!! She really wants your money to go into the overall beauty and mystique of the jewelry.

P.S.S.S I really can’t express how grateful I am for the quality of Jewelry and care I received.

Thank you so much Joel!!! I really appreciate your review! It was absolutely my pleasure to work with you and make the perfect ring for Madeligne!! I’m so happy for both of you!!

The ring Cynthia designed for me is absolutely gorgeous and I am thrilled with the result!

Cynthia managed to capture everything that I wanted in a ring; uniqueness, sparkle, elegance, delicateness, without knowing me! But most of all she crafted it with much care, paying attention to every detail. In essence she managed to capture my Joel. He pays so much attention to detail in all the things he does for me, that when I gaze at my ring I feel as if I gaze into his heart.

The ring was re-sized because it was a little giggly on my finger and even after that the ring has been intact and beautiful as ever. It fits perfectly now!

Cynthia’s sweet personality matches perfectly with her exterior. She is petite, elegant, and kind. She has an amazing talent and the ability of knowing what suits a person best based on their personality and or likes. She ordered a band for Joel that was not even in the catalog and it turned out to be the one I chose for him! I cannot wait!

Cynthia thank you so much for all your time, dedication, and flexibility! You have made this an incredible experience!

[…] fiancé-to-be wanted to surprise Lori with an engagement ring that has a round brilliant cut diamond in the center.  I brought in a few brilliant cut […]

[…] ring is a surprise engagement ring!  First, we needed to choose the right shape center diamond.  The choice was between a princess […]

Making a ring is truly magical. It goes through many... END_OF_DOCUMENT_TOKEN_TO_BE_REPLACED