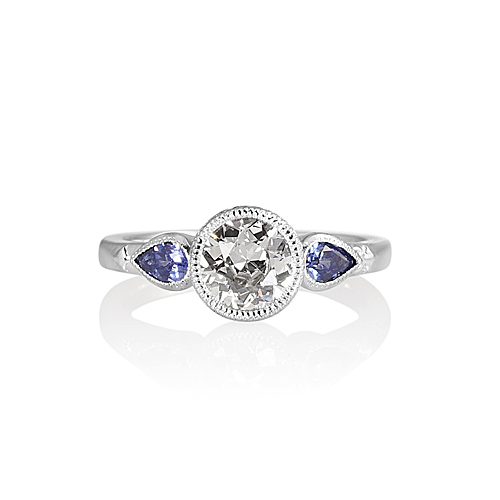 Some time ago, I received an email I will never forget. To read such pure passion, such love… the sentiment and admiration that Gage had for Bruna came bursting out of his words. As I wove what he told me into my own work, I wanted to weave his words through this story, so you too can be inspired by such devotion.

I am looking to craft an engagement ring for one of the more unrefined, traveled, and magical woman you may ever meet.

The happy couple lives in the Bahamas, so we were only going to be able to communicate by phone and email. But to be honest, I didn’t feel the distance at all. Gage told me exactly what he was looking for and enough about Bruna that I felt I had known this amazing woman for years.

He preferred an old, European cut diamond but was open to seeing a modern brilliant cut for comparison. The ring needed to have a strong structure, and the stones used needed to be bezel set, which is the most resilient type of setting. He and Bruna travel often and have an active lifestyle, so the ring had to be able to hold up! He gave me a budget to work with, and I got to work finding the right stones.

I want her ring to remind her of her spirit, her heritage, and her strength as a woman.

I found three diamonds that might be suitable for this piece: an old European, a round brilliant, and a cushion. I took pictures of each one alone and also an image showing all three on my fingers for comparison, so Gage could make his choice. 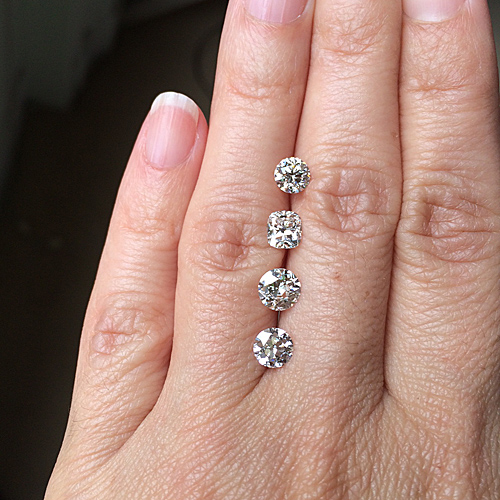 Loose diamonds to choose from in natural light 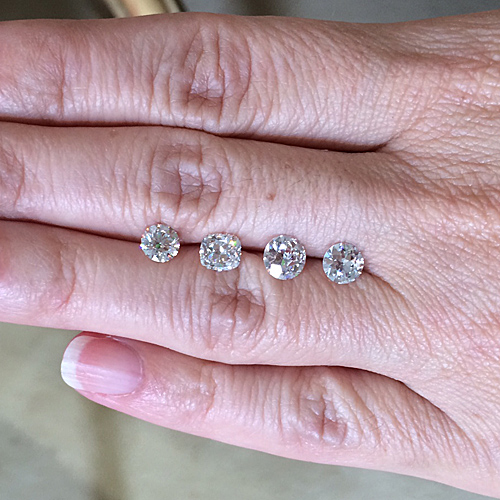 Loose diamonds to choose from in electric light

Gage asked his sister to come into my studio to see the diamonds. She preferred the round brilliant, but he wasn’t sure, and took his time making such an important decision. In the end, he felt that the old European was the best choice for Bruna and her ring.

She has eyes bigger than the Cullinan Diamond.

From our first communication, Gage was insistent that this ring reflect Bruna’s unique and wonderful personality. From his description, I knew that using Bruna as my muse would make for a dazzling piece of jewelry. I started by sketching my vision of Bruna based on his description and the images of her he sent me. She is an incredibly attractive woman, but what I found most striking about her is her beautiful eyes. They remind me of the ocean—an endless gaze that you can drown in.

She is mysterious but not a mystery.

I wanted this ring to be romantic and evocative of old world style, but also have some rawness. This combination would best express the multi-faceted spirit of Bruna. To capture this duality, I suggested pear-shaped blue sapphires on either side of the center diamond. These stones represented Bruna’s beautiful eyes. All three stones would be bezel set and beaded, and the center bezel would be hand engraved all around. There would also be a small shield motif on top of the band, right after the sapphires. The beading and engraving were reflective of old world romance. The tiny shields were for protection, since she’s active, and they also gave the design an element of edginess. 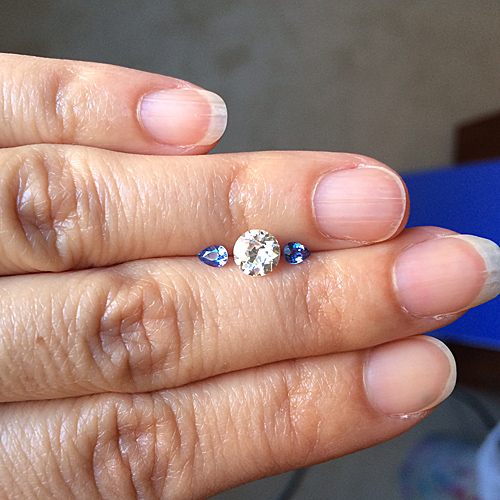 Bruna’s chosen diamond and side sapphires

I emailed the sketch to Gage and waited for his response. He loved the design and gave me the go ahead. I got to work crafting Bruna’s ring right away.

She likes simplistic and loves rustic, open air ambiance… a fire on the beach, covered bridges, an ocean cottage, and deep woods cabin.

After I finished, Gage emailed me that he and Bruna were going to be visiting family in Boston and then have a get-together up north. His plan was to propose to her in the mountains in New Hampshire. He was, of course, going to come pick up the ring before they went up there.

(Images of the ring)

I will always remember when Gage came in to my studio. For a quick moment, his eyes reminded me of Bruna’s—an endless ocean of feeling. When we shook hands, it felt as if we already knew each other! I was finishing up with an appointment so he waited a little. He was very nervous as he prepared to see the engagement ring his love had brought to being. Finally, I brought the box and watched him slowly open it. As soon as he saw it, tears came to his eyes! His happiness made me so happy that I became teary-eyed too.

I call her Lucky Margot.

I say that Gage and Bruna are both so very, very lucky, to have found such perfect love. 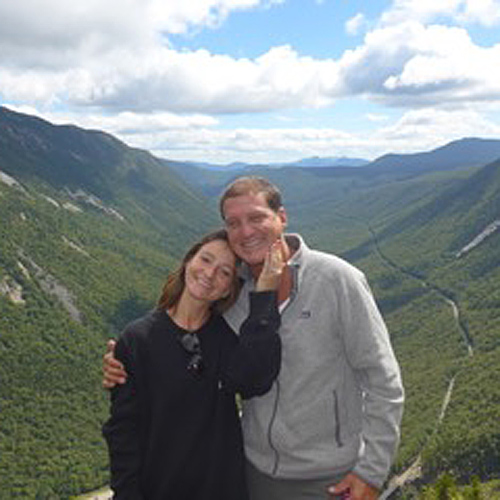 Making a ring is truly magical. It goes through many... END_OF_DOCUMENT_TOKEN_TO_BE_REPLACED