My customers always ask me “What is fluorescence?” “Should I stay away from it?”

Fluorescence is the visible light some diamonds emit when they are exposed to invisible (UV) rays which is daylight and the light in tanning booths. Submicroscopic substitutions and/or shifts in the diamond structure can cause fluorescence as well as prevent it. Nothing in either case is bad for the diamond.

In sunlight, if you hold a diamond that has fluorescence next to one that doesn’t, you’ll see that the one with fluorescence appears darker and in strong cases hazey. In a tanning booth, it will emit fluorescent blue light.

Because it’s common to have some degree of fluorescence, diamonds without fluorescence are more rare.

Indoors and under electric light, fluorescence doesn’t have a widely noticeable effect on appearance. If you are concerned and the diamond that you like has been graded with some degree of fluorescence, it helps to look at it in sunlight and with a fluorescence light. If you don’t mind it’s effect, then it’s fine. This way you’ll know exactly what you’re getting! 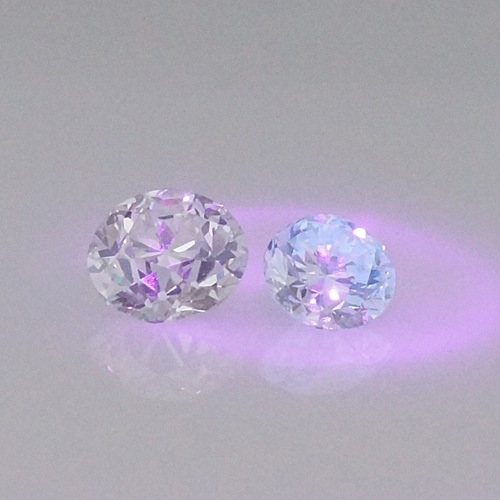 Notice what happened when I put the fluorescent light on both of them?

The one on the right, glows with fluorescence! You will see this effect only with the fluorescent light, in tanning booth and in night clubs!

Making a ring is truly magical. It goes through many... END_OF_DOCUMENT_TOKEN_TO_BE_REPLACED