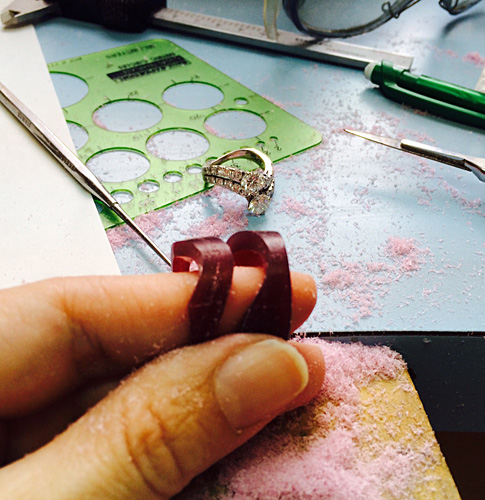 Here’s behind the scenes look at a new engagement ring that I’m working on! It’s going to be similar to the diamond double wave ring that’s on my blue bench in the image, however, this one won’t have the two center brilliant cut diamonds. I start by carving the wax for one of the waves and it’s the one that faces me, so it will be worn on the inside if wanted (the wax on the left ). Once I finalize the silhouette of the side that’s going to be joining the second wave, then I start carving the second wave band ( wax on the right ). I work on perfecting the side that will be attached to the first wave. The shape of the wave can be drastic similar to the diamond ring or it can be more subtle. That depends on the structure of your hand and your personality. This particular double wave ring  is for Whitney and she can definitely handle a more dramatic wave! I also determine the angles of the wave by actually wearing the wax on my finger and then drawing the outline of the wave in a style that would look most complementary and comfortable on. Join me later on to see how I progress with the carving of both waves! 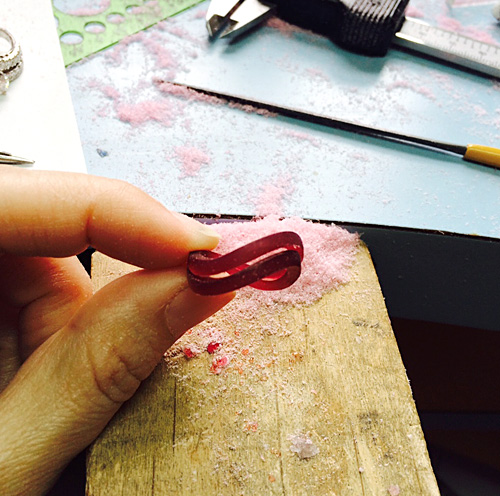 Here it is! I Finished carved both rings. I attached them at 3 o’clock and at 9 o’clock and made into one wave at the bottom for extra comfort. I have exaggerated the split in the middle so I can do any final touch up between the two waves. Once they are cast in Whitney’s desired metal, which is platinum, I will bring the waves closer and attach them at one point.  They will be attached only at the bottom leaving the top separated. This is necessary because in time, the metals may become further apart and the wave will loose its shape. Now the wax is ready and its going to be cast in platinum. I will post the image of the ring in platinum next. Stay tuned!

Here is the ring in platinum.  I have cleaned the metal and pre-polished it. The top row will be set with sapphires and the bottom row will be set with diamond. I made the waves narrow starting on sides and getting slightly wider as they reach the center and then becoming narrower again going towards the other side. Also, I made the wave that will have the diamonds a little wider than the wave that will be set with sapphires. After I had the ring pre-polished, I took it to the diamond setter and picked out the exact size of diamonds and sapphires that will be needed for its pavé setting. This way, I’ll get a precise and refined look with the metal and the gems in harmony in every angle.  I have already ordered all the sizes that I will need, so next is taking it to the diamond setter! This is when the waiting begins!

Whitney’s ring is now ready, however there always needs to be an element of surprise! I’m going to wait for Whitney to see her ring first and then I’ll post its finished image with the diamonds and sapphires all set. While we’re waiting for Whitney to receive her ring, I’ll start posting a new piece that I’m going to be working on.

Making a ring is truly magical. It goes through many... END_OF_DOCUMENT_TOKEN_TO_BE_REPLACED