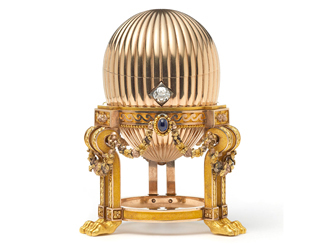 A Midwest metal dealer bought a gold item at an antiques mart for $14,000.  It contained a Vacheron Constantin watch, so he figured he could sell it at slightly higher than the gold value, but lucky for him, no one was interested.

The man typed “egg” and “Vacheron Constantin” into Google and came up with a Telegraph article on surviving Fabergé eggs written by Kieran McCarthy, director of London antique dealer, Wartski.

Of the 50 Imperial eggs designed by Carl Fabergé, the whereabouts of 42 of them are know, but eight are missing.  Five of them are believed to have been destroyed, but the other three escaped Russia.  This egg is one of the three!

Russian emperor Alexander III gave the egg to Empress Maria Feodorovna on Easter in 1887, and it was seized by the Bolsheviks during the Russian Revolution.  How it ended up in a Midwest antique mart remains a mystery.

The egg has been reportedly sold for $33 million to a private collector.  The egg’s buyer is letting the item be desplayed at Wartski from April 14 to 17.  This is the first time it’s been shown in public in 112 years!

This is a fantastic story, received from JCK, which I wanted to share with my readers.  You never know what you’ll find in an antiques mart!

Making a ring is truly magical. It goes through many... END_OF_DOCUMENT_TOKEN_TO_BE_REPLACED